Billy Idol is such an interesting piece of the new wave generation of the 1980s. Starting as a punk rocker and shifting to a more new wave sound in the 80s there is a strong chance you know either "Rebel Yell" or "Dancing With Myself" from him. But, in 1983 Billy Idol released the album "Rebel Yell" and let me tell you it is really good. The album art is super interesting to me because it has Billy Idol just sitting there shirtless not that crazy but its color of red but it a stark red to the black is just so good and creepy. Now let's talk about the music the A-side is fantastic 3 out of the 4 songs are some of Idol's best work ever and some of the new waves best work. Starts off with "Rebel Yell" one of the best party songs out there with such a good beat and one that will leave you dancing forever. Next up, is where this A-side falls a bit with "Daytime Drama", not that the song is bad it just is an in-between a dance and slow song which is super hard to achieve. And comparing it to the other 2 songs on this side it just isn't as good. Next is one of my all-time favorites songs "Eyes Without A Face" a song that is spooky and just a bit weird in all the right ways. Song has a fantastic music video and a great guitar solo so do check it out. The story of the song is that your girlfriend is cheating on you and you know it but she lies to you, and so it is always a classic to return to after a bad breakup. Next Idol picks back up the pace with "Blue Highway" the best way to describe this is as a drug-filled trip down Las Vegas highway which is what the story of the song is essentially. And being someone who has driven on the real blue Highway it is truly amazing to cruise that while blasting this song. The guitar work in this song by Steve Stevens is amazing really high energy and gets you moving. Flip it now to the B side where we start off strong with "Flesh For Fantasy" a song I would highly suggest you go and check out it does what "Daytime Drama" try to do give you a mix between dance and slow song that is slow in nature but still makes you want to tap your feet. Once again Stevens' guitar work is insane here while Idol's screaming on of the chorus is something that is just unmatched by him. This is just him going crazy by changing the pitch of his voice mid-sentence which is just soooo good. There are 4 more songs on the B side two of them stand out to me. One being "Crank Call" which isn't doing anything that we haven't seen before on this album but once against the singing ability by Idol is really shown off here with his ability to distort his own voice. And the work of combining the masterful guitar work with the synth is really well done in this song. I would highlight this just for the spectacle of the song rather than the song itself. The final song to highlight here is the final song on the album "The Dead Next Door" which is Idol really slowing everything down for this slow and spooky song. It is a good song to see Idol at a slowed-down pace and just listen for his ability to sing. And once again it is spooky so cool to throw on around Halloween or when your feeling spooky.

Overall I would give this album a solid 9.5/10 it obviously isn't perfect as there are songs I skip on it but the songs I don't skip are some of the best music I have ever heard. Recommend throwing this album on or buying on vinyl.

Popular posts from this blog 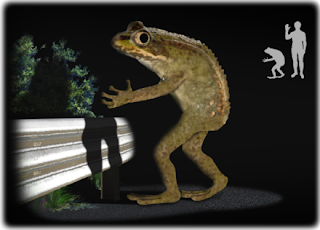 ALL HAIL THE FROGMAN!!!!! In this episode of our Halloween mini-series, Adam and Josh talk about various urban legends of Ohio, including The Gore Orphanage (the most haunted orphanage to never exist), the Cry-Baby Bridge, the Delaware Pirate and his haunted painting, Walhalla Road (Clintonville's most haunted street) and the famous Loveland Frogman of Cincinnati. Adam and Josh debate whether or not ghosts or Bigfoot might be real. They discuss what urban legends they'd like to adapt to stage or screen (and the musical sensation Hot Damn! It's the Loveland Frog! ).  All this and more below: Listen here! Also, for Adam and Josh's sources, check the following sites:  For the pirate: https://www.ghostsofohio.org/lore/ohio_lore_14.html For the bridge: https://en.wikipedia.org/wiki/Crybaby_Bridge For the frogman (article): http://www.weirdus.com/states/ohio/bizarre_beasts/loveland_frogman/index.php For Walhalla Road: https://www.onlyinyourstate.com/ohio/most-haunted-street
Read more